I’ve had a lifelong love affair with Star Wars, and with all the new movies and shows coming out, I’m like a kid at Christmas. (Two words: BABY. YODA.) I was two years old when Star Wars came out, so Star Wars has been around for basically my entire life.

It was only when I hit college that I realized that not every girl loved Star Wars as I did. Some of them liked it but wouldn’t admit it until I came out and admitted it, myself. Some of them had boyfriends who were totally into it but couldn’t be bothered. And some of them had not even seen it! WHAT??? 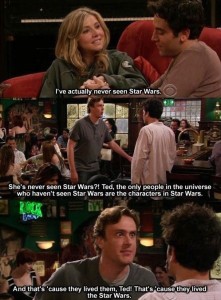 I could not understand why, because Star Wars fucking ROCKS. But hey, it was the 80s, and we were young. Some of us were too busy playing Barbie and collecting rubber bracelets  to notice Star Wars. Then some of us grew up and Star Wars became a thing that our geeky boyfriends loved, and perhaps girls thought it didn’t have anything to offer a female fan. If you missed out on the Star Wars hype as a kid, I’m here to tell you there is plenty of chick-flick gold in this sci-fi movie, and it’s not just for boys. Here are a few reasons why girls (or anyone, really) should love Star Wars…

Princess Leia: “Will someone get this big walking carpet out of my way?” #StarWarsSaturdays pic.twitter.com/G3yqEYszxU

6. There are lots of cute things (who are, also, badass.)

Wookiees are awesome. Chewbacca is the best. And I know I’m going to catch flak for this from every Star Wars geek who reviles Jedi because of everything-that-took-place-on-Endor, but Ewoks are awesome , too. Dude, they are walking teddy bears! They are cute and cuddly fuzzy things who help defeat the Empire! If that is wrong, I don’t want to be right. And now, with “The Mandalorian,” we have a cute non-fuzzy thing: BABY YODA! The memes alone make life worth living in this insanity. 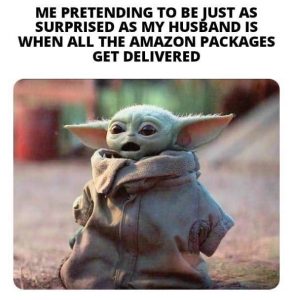 Just as Princess Leia in the gold bikini woke our geeky brothers and friends up to the “wonders of womanhood,” Han Solo was around just when we needed him to prove that hunky, devil-may-care guys had a sensitive side, too. As girls growing up watching the Star Wars series, we started out with a schoolgirl crush on Luke because he’s all boyish and sweet. Then we hit the tween years watching Return of the Jedi and we saw that scene on the wooden Ewok bridge thingie with Leia saying “Hold me” all dramatically and holy shit, we didn’t know it could be that way! Geek girls would be replaying that scene in their minds for years to come. Go on, admit it.

The new Star Wars movies have taken girl power to a whole new level, and I love seeing little girls appreciate this space fairy tale I’ve loved all my life. So, if you’re a girl/woman who hasn’t seen Star Wars, I urge you to get on that right now. I highly recommend watching it in Machete Order if you’re a first timer. Have fun. And may the force be with you…

Princess Leia is political as fuck. She is a diplomat who is out in the universe on behalf of her planet getting shit done. Underneath, she is a motherfucking rebel. http://wp.me/p7jtXE-2oH

Please join us on social media.

Are you ready to jump in?

First things first: let’s talk! Fill out this form to tell us about your project, and we will contact you to set up a time to meet or talk about it.