Yes, I know…a few months ago, I promised you rants about misused words and phrases. And believe me, I have been ranting in my mind every time I see them. Just because it took me this long to get one up on the blog does not mean I have been ignoring it (or you, dear readers).

To reward your patience, here is another WTF Word. This misused phrase has been driving me absolutely bonkers. Now you can go bonkers, too. Or, if you’re already going bonkers over the election (whether it’s in a positive or negative way, I don’t need to know and we don’t have to get all partisan and shit) then you can now go bonkers over something besides that. You’re welcome.

The phrase is REIN IT IN, people!

“Rein in.” I’ve seen this phrase a lot as people voiced their support of a certain candidate who shall not be named but who is now our country’s president-elect. Only they wrote it this way: “reign in.”  For example: “[Candidate] may seem a little impulsive but I’m sure [Candidate] will be reigned in once [Candidate] is in power.”  Or,  “I know that [Candidate] seems brash and aggressive to you, but don’t worry,  [Candidate’s] advisers will reign [Candidate] in.”

WTF are you saying? Dude, even Google Docs knows this is wrong. When I typed the phrase in my article draft, I got the little red squiggle and the “Did you mean reined?” 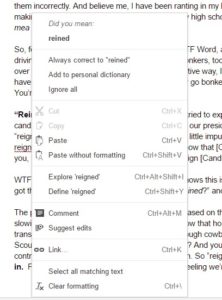 The phrase “to rein something or someone in” is based on the image of stopping, or at least slowing, a horse that’s out of control. I know that horses are not our chief mode of transportation anymore, but we’ve all watched enough cowboy movies and gone to enough Girl Scout camps to know that horses have reins, right? And you pull on the reins to reassert control and slow that runaway horse the fuck down. You rein it in. So “reign in” makes no sense at all. It’s rein in.

Please figure that out now, because I have a feeling we’ll be using this phrase a lot.

Please join us on social media.

Are you ready to jump in?

First things first: let’s talk! Fill out this form to tell us about your project, and we will contact you to set up a time to meet or talk about it.